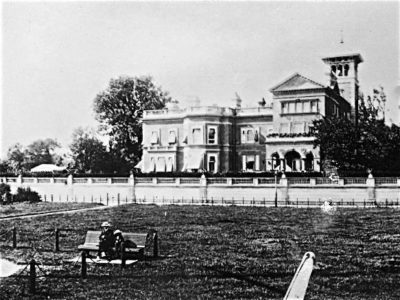 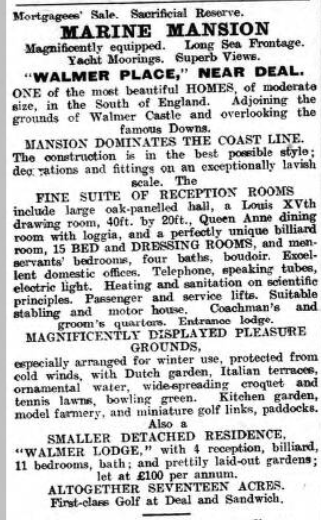 Walmer Place was built in 1901 for a Dutchman, Albert Oochs, as a luxurious manor house set in 16 acres. In 1909 it was purchased by Agnes Marke Wood, widow of wealthy shipping merchant and banker James Marke Wood who had died the previous year and this became her main residence until her death in 1927. Rosamond her only surviving child then inherited her estate including Walmer Place where she continued to visit.

James and Agnes Marke Wood had three children, Esther who died soon after her birth in 1878, James born in 1876 he married but died after a short illness in 1903, leaving no children and Esther Rosamond, born in 1881 and known by her second name. Esther married an Italian nobleman – Luigi Arborio Mella, Conte di Sant’ Elia – and took the title of Contessa Di Sant’ Elia. They too had no children and the couple came to live, more or less, separate lives.
With the rise of Mussolini Rosamond stayed away from Italy and when Italy came into the Second World War, she was “interned” at Claridges in London. She died in 1965 and was buried with her parents and brother in Liverpool.

The loss of Walmer Place

After WW2 Walmer Place fell into disrepair and following Rosamond’s death it was demolished and replaced with flats.The only remaining reminders of the original estate are parts of the surrounding wall, the rectangular pond and the garden house which can still be seen.

Walmer Place as painted by Agnes Marke Wood in 1914 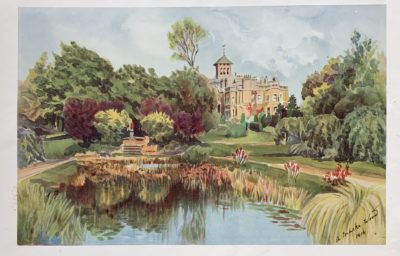 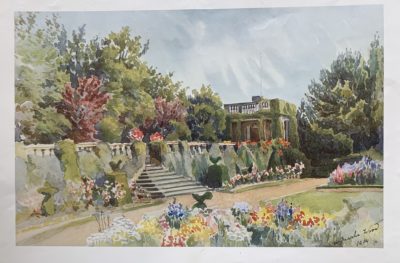 Newspaper image © The British Library Board. All rights reserved.
With thanks to The British Newspaper Archive (​www.britishnewspaperarchive.co.uk​)