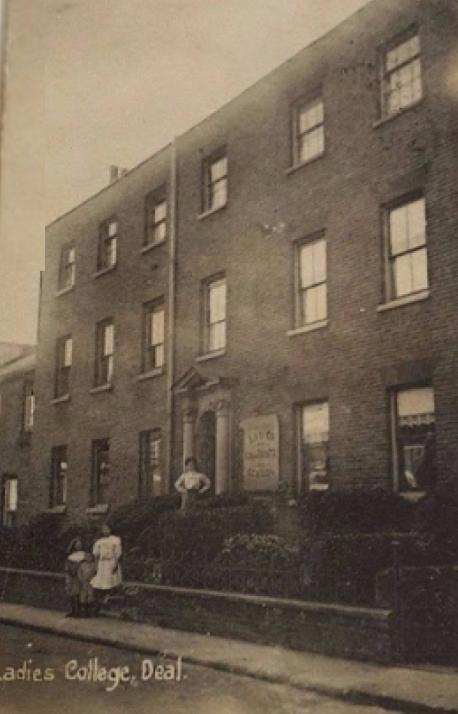 The building that is now occupied by Paydens Chemist and the Post Office on Deal’s Queen Street  was built around the turn of the 19th century. It certainly seems to be marked out on a map dated 1807. However, we don’t know who had the property built or who lived there. The first person who we can name as a definite occupier is Mrs Jane Humphrey who appears in a Post Office Directory of the mid 1830s where she is listed as running a “Ladies Boarding School” .

Jane at this time was married and her husband, a retired Jeweler and Watchmaker, William Hammond Humphry was also living at the school. Presumably they had private living quarters. According to the 1841 census, there was one ‘Assistant’, a French lady named Nathalie Chartier, also living at the school  as were fifteen boarding pupils, and two servants. However, although this was a Boarding School, there may also have been day pupils and other staff who lived in the town.

So far we have not been able to find a definite marriage for Jane and William. William though, had been married before and had one surviving son named John, a doctor, who was living with them when the 1851 census was taken. By then the school consisted of two ‘Governesses’. Nathalie Chartier being one of them, Jane Snook, from Sussex, the other. There were also  twelve boarding pupils, who mainly came from London, and two servants.

Jane ran her school for at least twenty years. But the number of  boarding pupils listed on the 1861 census had dropped to just three. Why the decline in pupil numbers we don’t know but few months after the census was taken William  died, he was buried in Hamilton Road Cemetery on 17 August.

Nathalie Chartier is not listed on the 1861 census for Deal, or anywhere else, so it’s fair to assume that she may have been visiting her family in France. Nathalie was to return to the school but sadly she died there in October 1869 and was buried in Hamilton Road Cemetery on the 1st November. We wonder, along with Jane Humphry how many pupils, and ex pupils attended her funeral? She had after all been at the school since its opening.

For how much longer Jane remained in Deal or where she went afterwards we just don’t know. The 1871 census lists a former pupil, Ann Taylor,  as ‘Head’ of the school’s household, though her occupation was ‘Schoolmistress’ which rather suggests that Jane was away and, she was deputising. Where Jane was at this time is uncertain.

Ann had been at the school since at least 1841 when she appeared as a ‘pupil’ on that year’s census. By 1861 she was an ‘Instructress’ but there is no clue as to what she was instructing! As we have just said Annie was still teaching at the school in 1871 so perhaps, along with Nathalie Chartier they were trusted and loyal members of staff.

We don’t know at this stage what happened  to Jane, her staff or the school itself between 1871 and 1881 all except for Annie who by 1881 was teaching in Hove. On retirement she went to live with her brother Joseph, a solicitor and his family in Islington. We have not been able to find anything else conclusive about Jane so we don’t know when she left Deal or where she went.

The school, though,  was taken over by Miss Anna Maria Tapley by the time the 1881 census was taken.

Anna Maria Tapley was born in Stepney in October 1832, the daughter of Thomas Tapley and Ann Harden. Thomas himself was born in Redcar, Yorkshire where his parents had moved to, from Folkestone. Thomas’ father, also Thomas, was probably a small ship owner and followed his uncle, Edward Tapley, to the area where they both seem to have traded from. Both returned south, seemingly to retire, Thomas senior to Folkestone and Edward to Deal. The younger Thomas, Anna’s father, was by then a Clerk and living in London where he married  Anna Maria Harden in 1831 and where they had their five children Anna Maria, Jane Minter, Thomas Harden, John and Mary King.

By 1861 Anna was the Head of a Ladies Boarding School in Thaxted’s Town Street, which is in Essex. Here both she and her sister Jane Minter Tapley were teaching languages and music.

The Chelmsford Chronicle, in 1868,  reported on a court case, between a Miss King and a Mr. Scott who had failed to pay the school fees for his children in 1865. Jane was a witness for Miss King as she was, up until her marriage to John Coughron Clare in 1867, a partner in the school. Anna, by 1871, had also left the school and had become a Governess in Broadwater, Sussex. 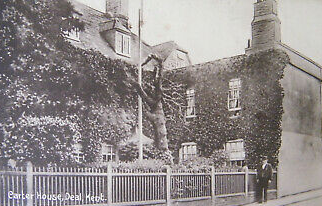 Perhaps it was through her relations in Deal that Anna heard about the lease of the Carter House School becoming available. She took over the school in 1877 from Mrs W J R Austen.

An Advert placed in the Deal, Walmer & Sandwich Telegram says-

Carter House
South Street Deal
Miss Tapley (successor to Mrs W J R Austen)
Solicits the patronage of the inhabitants of Deal and Walmer,
and wishes to inform them she will be in readiness to receive pupils on 1 August.
Terms on application

As we have said Anna by 1881 had moved to 6 Queen Street where she was to run the school that was to become known as the ‘Ladies Collegiate.’

In 1885 Anna married widower John Philpot. Born in Canterbury he was a Professor of Dancing and Calisthenics something that was very popular throughout the Victorian and into the Edwardian eras.  When the couple met he had been living in The Limes, Ramsgate but the couple actually married in Dalston, Middlesex, which was the former home town of Anna’s late father. They then set up home in Chiswick later moving to Gunnersby which is where John died in 1893. In his will he left an annuity of £260 a year to Anna and shared out the rest of his personal belongings and estate to his children by his first marriage. Anna died a year later, by which time she was living in Edmonton with her sister Mary. Anna died intestate and it was left to Mary to deal with the probate. Anna left £127 11s 1d. She was buried alongside her husband in the cemetery of St. Nicholas’ Church in Chiswick. Mary later returned to live with Jane at the Ladies Collegiate.

After Anna’s marriage the Ladies Collegiate continued to thrive under the governance of her sister, Jane Minter Clare, who  was ably assisted by Mary.

Mary had plenty of experience and had lived and worked with Jane for many years. According to the 1871 census, when Mary was living with Jane in Hackney, she was a ‘Manager’ of an unnamed ‘Ladies College.’

Quite when Jane and Mary moved to Deal and took over The Ladies Collegiate is not clear. Anna had married on 4 July 1884, so it seems likely that they arrived in Deal sometime before that.  Ethel Jane Clare, Jane’s daughter also became a teacher at the Collegiate. She, like her aunt Mary, remained a spinster throughout her life.

Music was central to the education that the girls received and the school was affiliated to The Royal Academy of Music as well as the Royal College of Music. We also know that the school had successfully “…prepared young gentlewomen…” for Oxford and Cambridge Locals.

According to the Illustrated Deal, Walmer and Sandwich directory the school, in 1898,  had sixty pupils, which suggests that most of the pupils were not boarders but day pupils. Certainly the 1891 census lists only eight boarders with three ‘governesses’ and one ‘pupil teacher’ .  A similar number was recorded in the 1911 census. The write up in the directory tells us that both boarders and non- resident pupils were recieved and that they kept the fees high enough “… to  secure selectness…”. 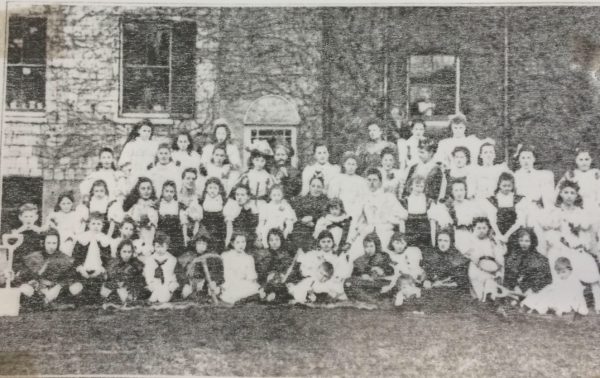 It seems that along with their academic and music studies the young ladies also took part in sports. We know from a postcard, that was posted on Facebook, dated March 4th, 1914, that a Hockey team from the Ladies Collegiate was planning to play a match in Deal against the County School of Dover.

1914 saw the outbreak of war. Jane by now was nearly eighty and so it seems that The Ladies Collegiate was winding down. Ethel, Jane’s daughter took over the running of the school and moved it into Neville House, once the home of builder George H Denne, sometime between 1911 and 1914.

Throughout the beginning of the war, she was to play her part in the fund raising and voluntary activities of the Young Patriots League.

When in October 1914 Refugees from Belgium arrived in the town she became a member of the housing committee. This committee not only co-ordinated the accommodation on offer but went knocking on doors trying to find desperately needed accommodation and acting as interpreters between the locals and the refugees. Ethel was also secretary of the Patriots League and was praised for her tireless work. She encouraged her pupils to raise funds for those in need by running stalls and assisting at the many fete’s held at the time.

Jane sadly was not to  see the end of the war. She died in Neville House in 1918 and was buried on 2 April in Hamilton Road Cemetery. 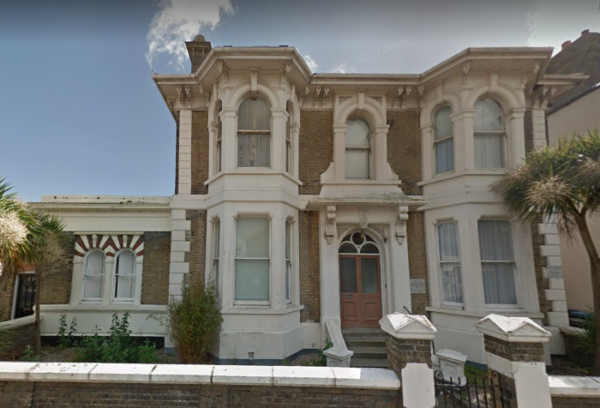 Ethel is listed in Kelly’s Directory of 1918 at Neville House Girls School, but it does seem that sometime after Jane’s death and the end of the war Ethel took the decision to close the school. Her aunt Mary moved to Hatch End Middlesex and died there in 1933. Probate was granted to her nephew Frank Leslie Tapley, the son of her brother Thomas.

By the time the 1939 register was taken Ethel was living in Somerset with Frank Leslie and his sister Maud. Then sometime after WW2 Ethel returned to Kent and died in a Broadstairs Nursing Home in 1962.

As for the building that once housed the Ladies Collegiate, it saw some changes. No longer a school it became offices, showrooms and shops and, known as The Exchange, it was numbered 1 to 4 where, amongst others, the Auctioneers Messrs. Worsfold & Hayward and the South East Kent Electrical Power Company traded. The forecourt was lost to road widening in 1927 which led to Queen Street being renumbered so in 1928 1 to 4 The Exchange became 17, 19, 21 and 22 Queens Street. The Porticoed door was probably lost and widened at this time too. Later the building became Seeboard Showrooms and much later, as it is today, Paydens Chemist with the Post Office now simply numbered as 17 Queen Street, Deal.

Widely apprived exercise scheme deemed to be suitable for women and girls that focused on the legs, arms and sholders
Close

Sources and further reading:
Illustrated Deal, Walmer and Sandwich Directory
Newspaper image © The British Library Board. All rights reserved.
With thanks to The British Newspaper Archive (www.britishnewspaperarchive.co.uk)
1914-1915 Our Stay in Deal & Walmer by Anon.
Reminiscences of Old Deal by Published by T. F. Pain & Sons