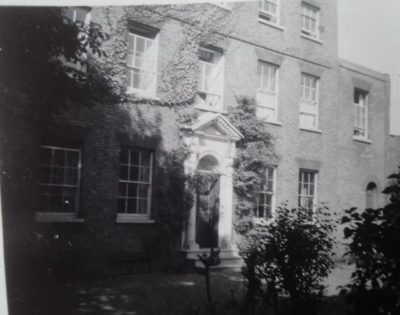 St. Andrews Rectory once stood on the corner of Union Road and the High Street.

But what of the house’s history before it was a Rectory?

The Hayman family, in the eighteenth century, owned a large amount of land in the Deal area that was mainly in the use as market gardens. In 1795 two Hayman brothers, possibly Thomas and William, built a brewery on their land that abutted Lower Street behind the Phoenix Public House, later known as the Queens Arms. They seem to have also built or extensively modernised a grand house in which Thomas lived.

Interestingly, two of the other Hayman men, Robert and Duke, have nearby streets named after them.

The ‘Mansion House’ sat in an acre of land enclosed by a wall and fences and on a lower part of the high garden wall, there was a stone with an inscription that said  “put up by Mr. Hayman in 1797”. The garden housed a well that was well known for its pure clean water.  Fresh water was much needed and sought after by the ships anchored in the Downs and so, apparently, water from this well was used to help fulfil some of their requirements. No doubt at a cost! 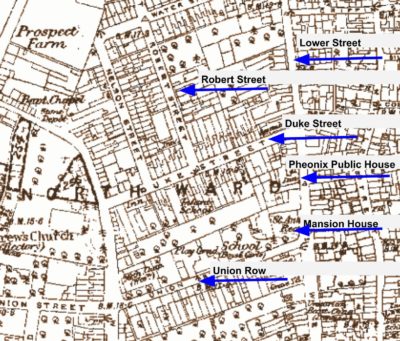 By 1801 the brewery was no longer in operation and the ‘House’, which was then described as “…A very capital modern built Mansion House…” was put up for sale.
Who purchased the ‘House’ is not known. However, the Overseers Rate Book for 1821 lists Edward Darby as paying rates on a house in Lower Street followed by Edward Iggulden, paying rates on a Brewhouse, Vat rooms and storehouses followed then by Matthew Brown at the Phoenix Public House.

This is backed up by the 1821 census which, rather helpfully,  in that year, lists the heads of households in Deal by street name. The first name given after those listed for Union Row and on Lower Street is Edward Darby  so it seems that he may have at least occupied if not owned the ‘House’.

The next occupant was James Reaks and his wife Sarah Dixon Belsey. James and Sarah married  in 1822, and at this time members of both the Reaks and the Belsey families were schoolmasters and mistresses running their own establishments.

We don’t know if James and Sarah owned or leased the ‘House’ or even if they were running it as a school but it was here that James died in 1833. His death announcement in the newspaper gives us the first mention of the name ‘Union House’ perhaps named by the fact that Union Row ran alongside it.

In July 1835 Sarah placed an advert in the Dover Telegraph announcing that  her ‘Establishment for Young Ladies’ will ‘recommence’ suggesting that she may have been one of the previously mentioned Miss Belseys  or that ‘Union House’ was being run as a school prior to her husband’s death.

In 1836 she remarried and moved with her new husband, Joseph Jackson, to Canterbury. By 1838 the Misses Neame and Mourilyan had taken over the running of the school.  Sarah died a few years later, in 1842, while visiting her brother Henry and brother-in-law Thomas Reaks at Alfred House Academy.

From the 1843 tithe map and apportionments  we know the next owner  was  Charles Gorbell. Charles was another schoolmaster who was then running a school in Admiralty House on Queens Street.  When he actually purchased ‘Union House’ we don’t know. He became bankrupt in 1842 so ‘Union House’ was more than likely put up for sale at around this time.

Edward Jackson Prichard took up residence sometime between 1841 and 1847 where he ran his Boarding and Day School for Boys.
Following Sarah Reaks’ advert in 1835 there doesn’t appear to be any references to the ‘House’s’ name either  ‘Union’ or ’Clarendon’ in the census or Trade Directories. The earliest recorded use of ‘Clarendon House’ that we have found is in Melvilles’ Directory of 1858 and sadly, in that same year, in the death announcement for Elizabeth Ann Prichard, Edward’s wife. That being so we don’t know when or why Edward chose  ‘Clarendon’ as the name for the ‘House’ and school. Edward remained at ‘Clarendon House’ until 1865 when he moved to Upper Norwood, London. 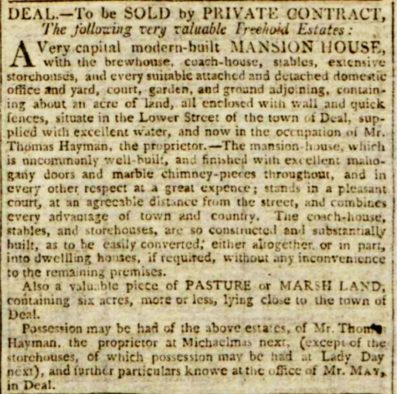 We know, when it was put up for sale in 1801, that all the doors were mahogany and that the fireplaces had “…marble chimney- pieces…”  but other than that we don’t have any descriptions of what the rooms looked like inside the Rectory.

Of the seventeen rooms we know there was, on the ground floor, a dining room and drawing room separated by a wide hall with an open staircase leading to bedrooms on the first floor, and a study and other rooms on the top floor. At the rear were service rooms consisting of a scullery, a kitchen, a butler’s pantry and wine cellars. An extensive garden surrounded the house laid out with flower beds and trees which could also be accessed from a glass house built onto the back of the house.

An old photograph of the back of the house, dated 1874, and taken from the garden shows that a Victorian bay window had been added onto a possible extention.

This side of the house looks as if it was partially clad in ivy and situated on the roof  was a small domed cupola or lantern.

In 1891 the Reverend James B Parker advertised rooms to rent at the rectory to Golfers playing in competitions at Sandwich St. George’s Golf Course. 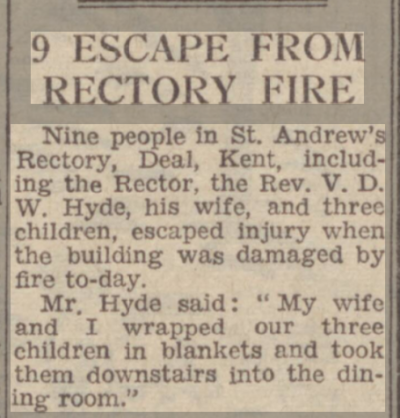 In 1949 the Reverend V D W Hyde and his family had a lucky escape when a fire started in the early hours in a downstairs room.
The upkeep of this imposing house had become too expensive and maybe the fire contributed to the decision to sell the Rectory in 1951. We are told it was sold for £1,000.  For a while it became a showroom for Worsfold & Haywards the auctioneers by which time the gardens were concreted over and the front garden became a garage forecourt where petrol pumps were installed.

Sadly this lovely building fell into disrepair and in 1964 it was demolished and is now the site of Union Road Car Park.

The image of St. Andrew’s Rectory, at the top of the page, and also this hand drawn image as it was remembered in 1949 was kindly given to us by one of the children of the Reverend Hyde . 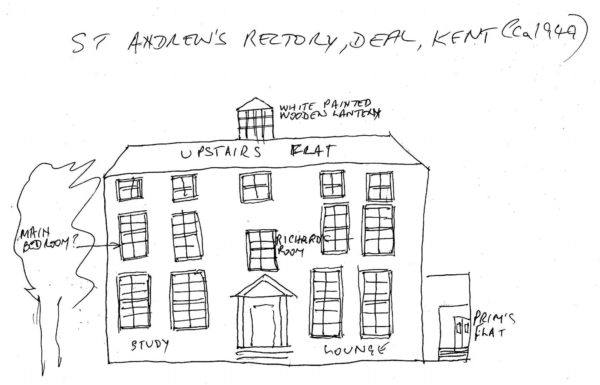