John East Dixon was baptised at St. Mary’s Church, Walmer on 11 November 1804 and was the son of Thomas Dixon and Easter Mourilyan.
Thomas appears to have died when John was an infant and Easter, his mother, remained a widow for the rest of her life.
John was to study medicine at St. George’s Hospital, London and by 1826 he had gained his LSA and in 1829 became an MRCS  Eng.
In June 1830, he married Ann Hulke the daughter of William Hulke and Ann Read. Ann’s father and brother, both named William, were also Surgeons living and practising in Lower Street, Deal.

A Surgeon of Deal

Settling in Deal John set up his own practice probably at 19 Broad Street, where he is listed as a surgeon in Pigot’s Directory of 1840. Here the couple had their three children, William Thomas, Ann and John Hulke. Ann sadly died, aged just one, in 1834.

The new union workhouses needed medical officers to care for the poor in their districts. John was the District Medical Officer officer for the Eastry Union Workhouse from about 1840

While continuing as a surgeon, John also served the community by going into local politics and in 1839 he was elected Mayor. This followed, according to the Kentish Mercury, Lieutenant Hardy of the Royal Navy declining to take the office and being amerced, or fined, the sum of five pounds. On a personal level, the coming year was to prove eventful and would affect him for the rest of his life. 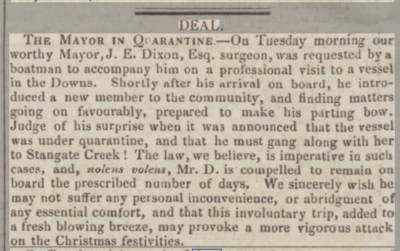 In December 1839, as a surgeon, he was requested, by a boatman, to accompany him out to a vessel on the Downs. Little did he know, at that time, that the Vessel was under quarantine and as such he would have to remain on board and go with the ship to Stangate Creek on the south shore of the River Medway. Stangate Creek at the time was a designated quarantine area. How long the ship and therefore John had to remain there or even why it was quarantined in the first place we don’t know.

Deafened by the Thunderer 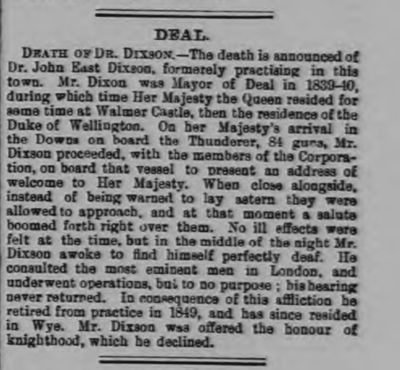 Going into partnership with his wife’s father and uncle, William and Benjamin Hulke, was sadly to lead to bankruptcy. They traded as bankers under the name of Hulke, Sons, and Dixon, once located at the present NatWest Bank on the corner of Lower (High) and Queen Street

For John, this meant the sale of his home, on the corner of Broad and Beach Street, which was the leased from the Archbishop of Canterbury. There are no records on the Lambeth Palace Archives catalogue for John East Dixon leasing property on Broad Street, or anywhere else, but there are for William Hulke. John may, therefore, have been leasing the Broad Street property from his brother-in-law.

He didn’t move far as the 1841 census shows him living on Beach Street with Ann and their youngest son John, then aged one. With them is a servant, Ann Budd, but not their eldest son William who was then aged about eight. We have not found where William was in that year though we do know that he later was to join the Navy. His younger brother, John, was to be ordained in the Church of England and for a time was the Vicar of Wye where his parents eventually retired to.

Despite his deafness, John continued to work as a surgeon. Sometime before 1847 he went into practice with James Seymour Leeson, with their practice being listed at 130 Beach Street in Bagshaws Directory of that year. The following year James sits and passes the examination for and becomes a member of the Royal College of Surgeons.

In October 1849, they mutually dissolve the partnership. John then moves to Wye which is where he is when the 1851 census was taken living in Church Street with Ann, John Jnr and his mother Easter. At some point, before the 1861 census is taken, they all move to number 3 Harley Street, Bow in Middlesex. He is listed there, in the London and Provincial Medical Directory of 1861 and 1865, as a retired Surgeon. Then by 1871, they are back in Wye. Easter died there in 1869 so they could possibly have all moved back to Wye sometime just before her death. Ann died, aged 82, in 1882 and John who outlived her by eight years died on 2 August 1890, aged 85.

A District Medical Officers would attend upon all poor persons requiring medical help within his district. To supply them with medicines according to a printed order from the Guardians or the Relieving Officer or Overseer.Send a report of such attendance and to the Guardians.

Sources and further reading:
Newspaper image © The British Library Board. All rights reserved.
With thanks to The British Newspaper Archive (www.britishnewspaperarchive.co.uk)
London Illustrated News
With thanks to ©Illustrated London News Ltd/Mary Evans Picture Library
Records of Eastry Union found on FMP.
The London and Provincial Medical Directory