When George 11 arrived from Hanover in 1740 George Carr,  Deal’s Collector of Customs, drove his chaise into the sea and alongside the barge that was bringing the King ashore in an effort to prevent the Royal feet from getting wet! The King apparently later complained to the Mayor, Josiah Lane, that a landing stage was needed.

Josiah Lane soon organised the building of a wooden jetty going out into the sea from opposite Coppin Street. It was then used by passengers and crews as they left or joined their ships that were anchored in the Downs. A storm in 1758 brought down the jetty which was never rebuilt.

Deal’s first pier was built in 1838 when the Deal Pier Company purchased a plot of land near the Royal Hotel. Engineer Sir John Rennie was commissioned but sufficient funds were not raised and this new wooden pier was left partially built so it soon became an eyesore and a danger to shipping. Then in 1857, like its predecessor, it too was lost to a storm. 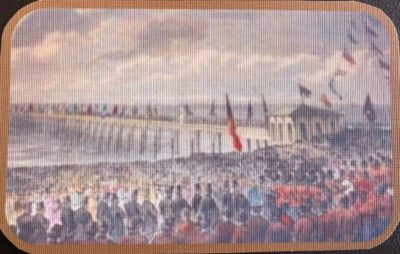 The Opening of Deal Pier -from an old print

Edward Hayward , the proprietor and editor of the newly founded Deal, Walmer & Sandwich Telegram, supported the building of a new pier so he used his newspaper to campaign for its building. By 1861 The Deal and Walmer Pier Company was formed and work on this new pier finally began in 1863 with the driving in of the first pile by MP Edward Knatchbull-Hugesson.

When completed Deal’s new iron pier was a 1000ft long with seating right along its length it even had lanterns for nighttime illumination. Visitors arriving or leaving by sea could have their luggage taken along the pier by a tramway that was also used for the movement of goods. Then like now there was a fishing deck and at the end, there was a cafe and a concert hall.

The Pier had two opening ceremonies the first was by Mayor W.M.Cavell in July 1864 when he formally opened the nearly completed pier.

The second was a grand opening in November 1864 when, with the band of the Royal Marines, the town’s people, troops from the barracks and the town’s dignitaries paraded through the streets. On reaching the pier Mrs Knatchbull-Hugesson seated on a specially decorated tramway truck and was drawn by workmen to the pierhead where, with a short speech, she declared it open.

Tolls were charged for entering onto the pier as were tariffs levied on goods entering and leaving it. Laidlaw and Son the piers contractors took over the management of the pier until 1920 when Deal Borough Council purchased it.

Some local boatmen though thought the pier a danger to shipping. In 1871 the lugger Reform was pulled into the pier by a storm when it was attempting to launch in answer to a distress signal. Eight of its eleven crew were lost. Two other vessels, Merle and Alliance,  were to hit the pier. Then in 1940 a Dutch ship Nora, after hitting a drifting magnetic mine blowing a hole into her, was dragged upon Deal beach until a rising flood tide lifted and crashed her into the pier leaving it in two pieces.

On the whole and up until Nora hit the pier it was much appreciated by the townspeople and it’s visitors.

The present pier was opened by the Duke of Edinburgh on 19 November 1957. Just as with the former pier the band of the Royal Marines local people and dignitaries attended the ceremony.

Constructed of reinforced concrete it too is 1000ft long, with seating along its length and landing and fishing decks at its end as well as a cafe but, unlike its forerunner there are no entry tolls to pay, so everyone is free to walk along and enjoy the fresh air and the view of Deal and Walmer gained from it. 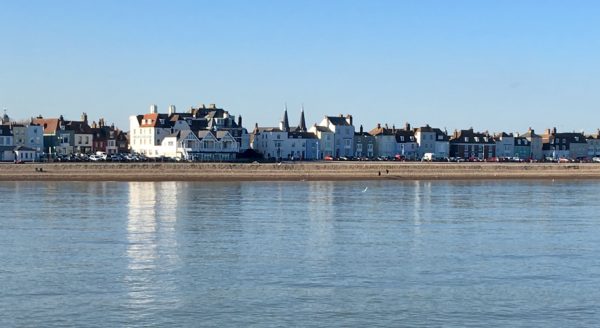