Harry Holman was born in Old Portsmouth in 1883. His parents were Priscilla and William Holman. He had three brothers Joseph, twins Alf and Fred and two sisters Nellie and Alice (who was called by her middle name Emma). Harry’s father was a seaman as his father had been before him. 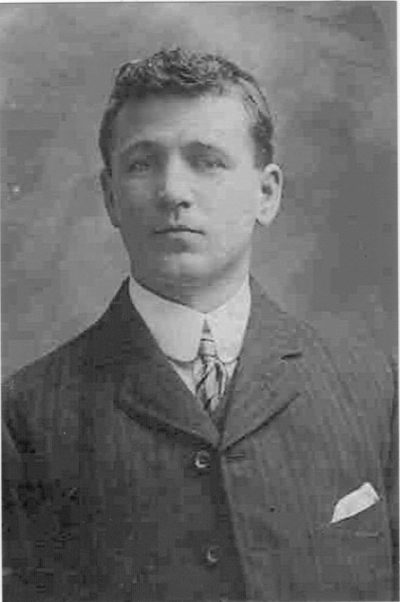 Unfortunately William had a problem with his sight and was invalided out of the navy at quite an early age but not before he had been awarded a medal for long service and good conduct in 1879.

He provided for his family by returning to the sea as a ‘trimmer’. During this period 1890’s-1900 steam ships were gradually taking over from sail and Harry’s father was responsible for positioning the coal evenly, during coaling, to maintain the ship’s ‘trim’ or stability. Basically, he was shovelling coal in the bowels of the ship! Very hot and dangerous work.

In October 1897 Harry’s father was severely injured in an accident whilst helping to ‘break up’ an old ship in the Camber Dock, Portsea. He died several months later from his injuries in October 1897 aged 42. At the inquest William was made to be at fault for the accident. The representative of the shipyard claimed that William failed to follow instructions. Unfortunately, William’s family had no money for a solicitor and therefore no one to fight for compensation for his family. His wife, Priscilla, attended the inquest and must have been distraught when she was sent away empty handed.

So, at the age of 13 Harry had to help provide for the family along with his younger brother, Joseph. He worked on a variety of ships and in the 1901 census we see he is a Fishmonger. He would have got up very early in the morning to barter for the fresh fish being landed in Portsmouth Harbour at the Fish Market and with his basket full he would then walk the streets selling to the cooks and housekeepers of the more well-to-do families in Southsea. His earnings would have been meagre but ‘every little helps’. His mother was left a widow with six children to provide for. No welfare state in those days!

As he got older Harry started to crew on Steam packets. These were ships that carried passengers, but mainly mail, parcels and some light goods to faraway places. Harry sailed a great deal of the world and, before he joined the crew of the Titanic, had recently returned from a long journey to South Africa. These trips would have taken him away from home for a long time, many months and sometimes years. Harry’s sister, Nellie, lived to be a very elderly lady and she said they missed him terribly. Nellie said Harry was very handsome with lovely curly hair and was a great favourite with the girls.

In 1907 Harry married Louisa Josephine Chiswell. Jo (as she was known) was born in Southampton where Harry now had lodgings so he could be available to be signed on to any of the ships in port. Southampton docks had recently grown in size due to the White Star Line using it as its home port rather than Liverpool. Southampton was easy to reach from London by train and there was so much space at Southampton the White Star line built a  railway line from Waterloo right down to the harbour side and the very palatial steps of a grand hotel where the 1st class pasengers stayed overnight before they boarded the liners the next morning.

Harry still kept in touch with his family in Portsmouth and from a letter we have in our archives, written in January 1912, we know that he had a pet dog and was very close to his sister Emma and her husband Ted. It seems his wife suffered from asthma and was often ill. They had no children. 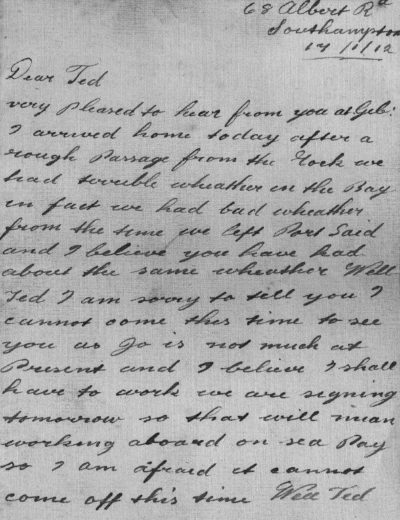 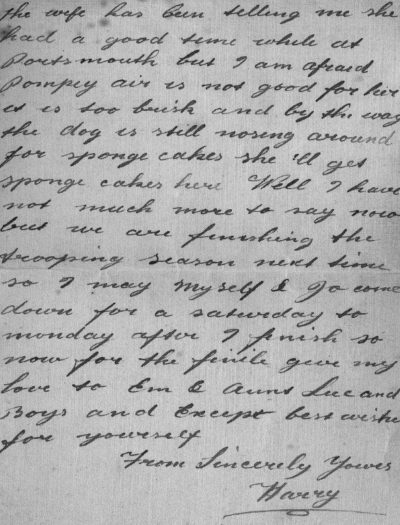 Harry joined the ill-fated Titanic in Belfast and helped to sail her from the shipyard, where she was built, to Southampton and her waiting passengers. We can’t imagine how he must have felt as he sailed towards home on the world’s largest liner. Maybe he thought that this was something he would be able to tell his grandchildren about. 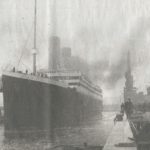 RMS Titanic, on its maiden voyage, left Southampton for New York on 10 April 1912. She struck the iceberg just before midnight on the 14th and sank nearly three hours later with the loss of over 1,500 passengers and crew, including Harry. We know nothing about how he died except he is logged as ‘missing at sea.’ When, after the disaster, they sent the small boats out into the Atlantic from Halifax the sailors were instructed to return only with the bodies of people in civilian clothes unless they had some identification on them. Harry’s sea papers would have been in his coat pocket. If he wasn’t wearing his jacket when the ship went down he would have no identification. These bodies were just thrown back in to the sea.

It is a little- known fact that all crew members had their pay stopped from the moment the Titanic sank. Harry was earning £5 a month. His wife received £2 a month sometime after the disaster from the relief fund. This was due to her being too sick to work.

Louisa went on to live in to her 90’s and married 4 times.