The Contagious Disease Act was initially was passed in 1864 with the aim of preventing venereal diseases within the armed forces. This legislation meant that police officers could arrest women suspected of being common prostitutes who they also suspected of being diseased. They were then forced to undergo a medical examination and if they were found to be infected, they were confined for up to three months, in a Lock Hospital, until they were recovered. Initially, though this Act was only in force in Chatham, Devonport and Portsmouth areas with a radius of five miles.

1866
In 1866 the act was reformed and the new Contagious Disease Act of 1866, spread its jurisdiction to more naval ports, districts, and army towns and even the civilian population—with a new aim of regulating prostitution. This meant that every prostitute was periodically examined whether she was suspected of being diseased or not and if that infected the women could then be held in a lock hospital for a year.

1869
The act was again reformed in 1869 adding more towns to the list coming under the act including this time,  early 1870, Deal and Walmer. The radius was also extended to ten miles and women not fit to be examined could also be held for up to five days. 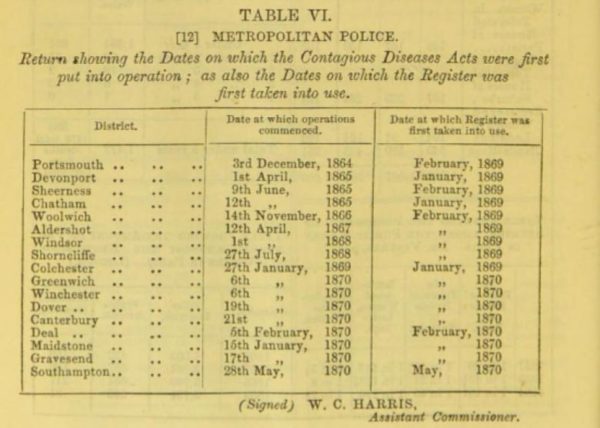 Once in hospital, the act provided the women with food, clothing and a bed, with moral and religious instruction and if required they were taught to read and write as well as given ‘other useful work” and once cured, and if she so wished, she could be sent home. All this was at the government’s expense. They were also offered a place in a refuge and respectable employment.

On the surface, this all sounded as if this was an act of care and kindness towards the women but many did not agree. The National Association for the Repeal of the Contagious Diseases Acts, which originally actually restricted women from joining them so, in turn, led to the formation of the  Ladies National Association for the Repeal of the Contagious Diseases Acts, both campaigned for several years for the act to be repealed. They felt that the Act legalised, in their eyes, the “sin” of prostitution and putting the women under police and medical control and that poorer women were often badly treated. That the act also highlighted the double standards of the day where men, who were just as responsible for the spreading of sexual diseases, were not subjected to the same medical examinations or indeed prevented from visiting the women in the first place. The act was finally repealed in 1886

Through reading newspaper reports, while researching the Orrick family, we found that Mary Jane Orrick was subjected to a medical examination under the Contagious Diseases Act 1866-9. Maybe she, and her fellow Defendants, are included in those numbered in the table below?

An establishment that specialized in treating sexually transmitted diseases. They operated in Britain and its colonies and territories from the 18th to the 20th century.

Sources and further reading:
The extension of the contagious diseases acts to Liverpool and other seaports, practically considered By Lowndes, Frederick Walter  https://archive.org/details/b24398706
https://en.wikipedia.org/wiki/Ladies_National_Association_for_the_Repeal_of_the_Contagious_Diseases_Acts
https://en.wikipedia.org/wiki/Contagious_Diseases_Acts
https://geofframbler.blog/2019/01/08/a-dark-period-in-the-history-of-st-barts-that-delivered-a-burning-injustice-to-women/
Tables from–The Contagious Diseases Acts : the Contagious Diseases Acts, 1864, ’66, ’68 (Ireland), ’69, from a sanitary and economic point of view : being a paper read before the Medical Society of University College, London, on Thursday, November 30th, 1871   https://archive.org/details/b22298423/